Following up the suggestion of "Liquid Reamer" that was made by Buckjumper to help keep my old and neglected airbrush clean, I wandered along to chat with Derek Russan at Eileen's Emporium whilst I was at Railex this weekend.
Derek does stock Liquid Reamer :-)
But he'd just sold out :-(
It must be the power of suggestion from the web ;-)
However what he did have (and I think have recently come into stock, as I don't recall seeing them before) are a set of tiny brushes, that are perfect for cleaning out paint bowls and nozzles on an airbrush: 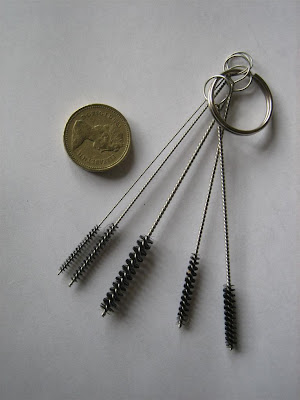 At only £3.50 for the set, they seemed like an absolute steal.  But that would be a bit rude, so I bought a set instead.  If I get some more modelling done on this Bank Holiday, they may well be getting a good usage later this week.
Flymo
Posted by Flymo at 08:01 No comments:

Hmmm... You think that you've got your airbrush clean, and then...

After the last bout of use (see previous post on painting the Pug) I thought that I'd cleaned my airbrush out fairly well. However the action of the trigger was still a little "sticky" so I thought that it merited a little more attention if I was going to get decent results next time that I wanted to use it.

So an old jam jar that is surplus from my wife's stockpile (she funds her sidecar racing by selling homemade jam - just don't ask...) and drop all the bits in it. Fill up with cellulose thinners and give a good shake.

The thinners is now a dirty dark yellow colour, and the parts clearly still aren't entirely clean. I'll give them a good going over with cotton buds in a while. 
But it's surprised me how much paint has built up inside and still hadn't come out through "normal" cleaning. I think that I'll be doing this more frequently in future...

Off on the right foot

It's been awhile since I looked at the Ulpha Light Railway.  I tucked it away safely in the back of my garage (at the opposite end to the birdfood, so hopefully our resident woodland creatures don't mistake the scenery for a snack...) and have left it there until I feel that I can get the whole thing out and erect it for a couple of days.
However I have started work on the restoration of the infrastructure.  When I first brought it home, and did a test erection in the garage, I had no end of trouble getting it levelled out.  After a life of twenty years, even though each trestle leg was fitted with screw-adjustable feet, I found that they were dirty, corroded, jammed, or a combination of the three.  Something needed to be done to make them workable again.
My first thought was just to replace them, so I had a quick look on the web.  There are a number of suppliers out there, ranging from Screwfix to model railway specialists.  But generally the price per leg was £3-4 for each foot, and I needed 16 of them.  I didn't really want to pay around fifty quid if I could avoid it.
So on a sunny evening, I sat down and unscrewed them from the bottom of the trestles.  That in itself took some time, as the screws had also suffered from time.  Having got the feet off, I used spanners and a bit of brute force to separate them into separate components.  The locking nuts were discarded, as I'd already got replacement stainless steel ones from Screwfix - strongly recommended for this sort of stuff.
To clean all the dirt and clag off them, I popped all of the feet, and the mounts, in my ultrasonic bath with plain water and gave them a few cycles.  Then they went into a cooling oven (after dinner...) to dry them out thoroughly.  After that, the restoration could begin.
For working on motorbikes, I have a set of taps and dies: 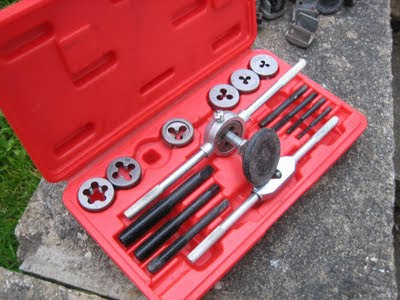 So I ran the feet through the dies to clean up the threads and get rid of residual gunge and corrosion.  Now they are all back together, with new nuts, and a touch of grease on them, and I hope that they'll give many more years of service. 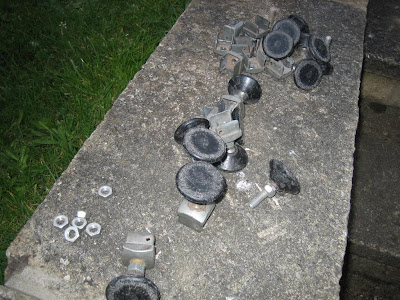 Next, onto the trestles themselves...
Posted by Flymo at 23:11 No comments: