The first thing that I did was to make the functional tie-bars.  These will sit below the baseboard and have the task of holding the dropper wires that come down from the pointblades.
Much is made of the torsional stresses that are put in dropper wires when they are soldered in place on turnouts.  I’m not sure how much I buy into this idea, unless the section under load is particularly short.  However I saw advantages in keeping the TOU and the pointblades physically separate:
To do this, I used some small bore brass tubing.  This needs to be just a little larger in bore than the wire that you choose to use for dropper wires.  In this size, brass tube is more easily cut by rolling it back and forth under a sharp scalpel blade to create a score mark than by trying to saw it.  Using cutters will, of course, simply close up the ends of the tube, which is no good at all.
The length of the dropper tube isn’t actually critical.  I used the length shown in this picture to make both tubes for this tie-bar. 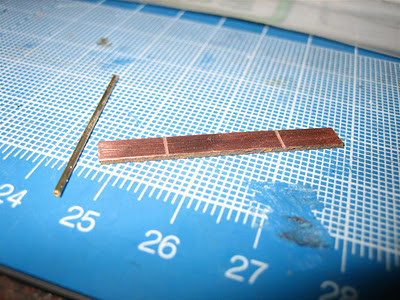 The dropper wires are very flexible, and I didn’t need to rely on the accuracy of the functional tie-bar to keep the pointblades the correct distance apart.  Nevertheless, to ease the stresses and strains of holding the pointblades in place, I made the two dropper tubes 16.5mm apart.  This was measured on the copper-clad strip, and as you can see two saw cuts made for the tube to sit in before it is soldered.  This just helped keep it located correctly and at right-angles.
As you can see in the next picture, I later cut a further gap in the copper clad to insulate the dropper tubes from each other. 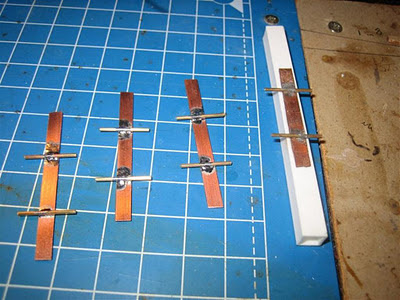 In this picture you can see that all of the tie-bars have been made.  I have four turnouts on the board that I am building, so four was the number that I made.
You can also see that the first functional tie-bar has been glued to a section of plasticard square tube.  This is the smaller section – in my case ¼” in size.  This was done simply with some two-part epoxy. Again, the alignment isn’t critical, but it should be roughly central, and roughly square, to the plastic strip.
The next, rather dark, picture shows the production of the mounting plates.  These are approximately 70mm by 30mm.  You could make them larger if you wished, but I wanted to be able to fit them reasonably easily underneath the baseboard. 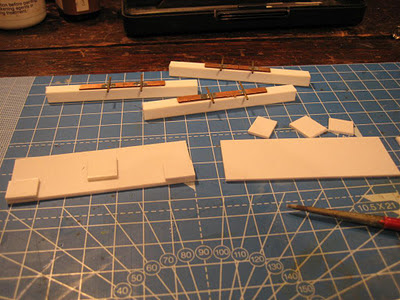 The small squares of plasticard that are being fitted are an extra that may not be necessary for other modellers.  The smallest woodscrews that I have available to fix the completed units to the baseboard are still too long to go through the TOU, and then into the baseboard that is made out of 6mm ply without the ends of the screw bursting through the top surface.  Therefore by putting spacing plates, the screw goes fully in but the tip will not come out of the other side.  If you used thicker baseboard, or glued the TOU down rather than screwing it, these would not be necessary.
I made provision for three mounting points for the screws.  In practice only two, at either end, have proved to be necessary.  After the spacing plates were glued in place and dry, they were drilled with 2mm holes to take the screws.  Given that plasticard is fairly soft, this was just done with a drill in a pin-chuck.  There was no need for any machine tools or suchlike.
(to be continued...)
Posted by Flymo at 10:45