Next I moved on to the construction of the tie-bar mounts.  These are simply two cubes of the larger size plastic tube mounted on top of each other.  Two things to consider:
-          if you are cutting the tube, as I did, with a piercing saw do clean off the edges of the tube earlier to remove any plastic swarf still attached that may interfere with the smooth sliding of the tie-bar.
-          the height of the mount should be dictated by the height at with the point motor provides drive.  In the case of the Conrad motors that I am using, this is quite high and I wanted to make the connection at the same height.
These really are just one piece glued on top of the other. 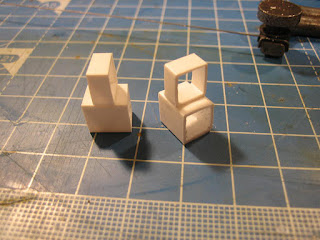 After this, it was time to try the functional tie-bar out for size, to ensure that it slid freely.  I actually found that the fit was a little looser than I had expected from two adjacent sizes of tube.  However the amount of slack was not so great as to cause problems, and it gave me a bit of wiggle room for fitting them in place. 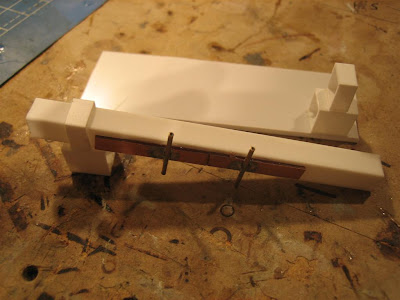 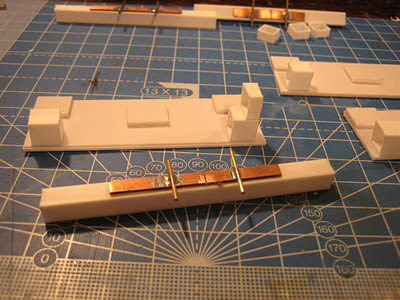 The pictures do show a slightly different order of fitting the mounts as some pictures were taken during the build of the initial TOU, and some during the batch-build of the balance of them.  The differences aren’t critical though, and just show that there are many ways to go modelling in P4.
This is the completed unit, with the functional tie-bar fitted in place. 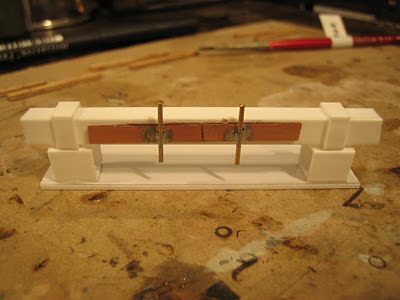 Two points to remember, thankfully neither of which I fell foul of, but I’m sure that I came close:
-          The copper-clad strip should face the outside of the unit, so that the dropper tubes extend out over the edge.  This is probably the only critical bit of the entire process, as there needs to be clearance for the dropper wires to come down from the point-blades past the edge of the TOU, and then go through the dropper tubes.
-          If you fit both the mounts to the base first, without including the functional tie-bar, you won’t be able to slide it in to the mounts afterwards.  There simply isn’t the free room to do this.  So it does all need to come together in one go.
So that completes the building of the TOU.
(to be continued...)
Posted by Flymo at 10:50