The Restoration Chronicles - A pause for thought

In my last post, I was thinking that the greatest hurdle to overcome in restoring the LNWR two plank wagon would be to restore the warped dropsides to some form of straightness. Wrong! I've actually made pretty good progress on that particular task, and they only need a final bit of tweaking (I can't decide whether by the use of solvent, or a carefully waved soldering iron) to get there.

The biggest problem has been to find out what the wagon actually is...

I know that it comes from the Ratio set of four permanent way wagons - I even have an unmade set of the same at home, sitting here next to me. The problem comes that the kit instructions are brief to the extent of not even including any prototype details. They give an LMS painting scheme from 1923 to 1947, and that's it!

I emailed Peco today, as they now seem to be the manufacturers of the Ratio range, and had the helpful response: "Thank you for your Email. Unfortunately we do not have any extra information other than the details supplied with these kits."

So a blank there. I have a copy of the excellent "LNWR Wagons Volume 1" but this only covers the main commercial types of wagon. I assume that the departmental and more esoteric stock was intended to be left for Volume 2. Nevertheless, Appendix 2 of Volume 1 gives me some clues.

There is a ballast wagon listed with a 16ft body (which the kit scales out at) under Diagram 62. However even the very useful LNWR website
Posted by Flymo at 22:55 No comments:

First on the workbench, and number 1 in my fleet of somewhat eclectically recorded list of vehicles is an LNWR two-plank permanent way wagon.

This was built from the Ratio four-pack of wagons which I believe is still available.

To fit in with the permanent way purpose of the wagon, it is part-loaded with some C&L chairs, doing the job of covering up the lead sheet with which it is weighted. 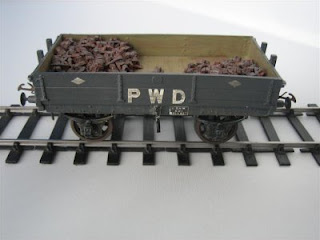 So, what needs restoring? Initially, the diagnosis is quite promising:

- all of the buffers have survived, and are still freely sprung. No work needed there.

- The single sided brake gear is intact. Looking at it end-on, the lever guard is angled in slightly at the bottom, and could do with correction. I suspect that is a construction error that I made when I originally built this. Something to correct though, if possible.

- The wagon is fitted with compensated w-irons – de rigueur at the time that it was built. However the rocking one could do with a little bit of tightening up to stop it being quite so floppy. I think that I can get away with better trackbuilding, and less suspension movement in future. I suspect that my earlier attempts were overly influenced by the words of Iain Rice and his preference for light railway quality permanent way.

- even the bump stops that exist to protect the brake gear from the weight of the wagon side as it swings down are intact. On both sides. Which raises an interesting question.

Even if the long-lost kit instructions explained it, would bump stops (and the corresponding bash-plates be found on the wagon side that doesn’t have brake gear that needs protecting? My guess would be that yes, it does, as the stops would also stop damage to the axleboxes by the side swinging into them.

Things that definitely do need work include replacing a number of the chairs where they have fallen off over the years.

Also, and this is the biggest problem of all, an aerial view shows that where I have piled the chairs against the side of the wagon, and glued them in place, the solvent has made the wagon side bow in. This really does need straightening out to be convincing. 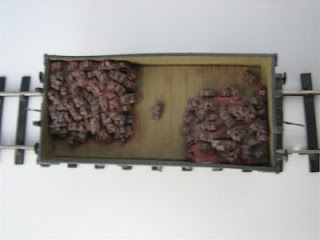 The issue of coupling standards also needs to be addressed. More on the coupling dilemma at a future date, but even though the Sprat & Winkles on this have survived, I need to consider if they are of the right dimension for the future.

Enough typing for now. Time to pick up a knife and start work…

Welcome to my trials and tribulations, musings and mutterings, successes and failures, as I try to remember how to model in P4 after a gap of more than ten years of idle armchair occupation.

The Buckjumpers bit sort of suggested itself. Wherever I’ve lived, the local railway history has always attracted me – from the bucolic GWR branchlines of Worcestershire to the gritty LNWR environs of West Yorkshire I’ve been interested in the industrial archaeology of my surroundings. Now that I’m living on the Herts/Essex/Cambs borders, the byways and eccentricities of the Great Eastern Railway have caught my eye.

And the Beer? Well, mine’s a pint thank you. I wasn’t aware of brewery railways until recently, but since then I’ve found it a fascinating topic to research. You will read more about the background to my small bit of hypothetical history in future, but for now it gives me the opportunity for some industrial light railway quirkiness, a genuine purpose to a timetable and wagon movements, and some incredibly photogenic buildings.

This blog will take some random turns as it progresses. To start with, there is no layout – only some ideas and images floating around in my head. There’s also a backlog of past misdemeanours to correct, so watch out for what (with very due cause) I’m entitling “The Restoration Chronicles”.

I'm also keeping a thread on the Scalefour Society forum. It's at http://www.scalefour.org/forum/index.php and you'll find it in the "layouts" area. You don't have to be a Society member to read the Forum, and as a non-member you would be very welcome to post to the Guest Book. You never know, you may even fancy joining yourself...

So for now, I’m off to start some modelling.
Flymo
Posted by Flymo at 21:00 No comments: