I can see clearly...

There - you'll have dire Seventies song lyrics buzzing around in your head for the next week...   The reason for it is that I've finished the small project that I've been working on, and that I needed some brass countersunk screws for from Eileen's, which resulted in the spontaneous airbrush purchase at the St Albans exhibition.
As part of the Scalefour Society demonstration stand for exhibitions, we sometimes are asked about the need for suspension on models built to P4 standards.  I'm not going to go into the reasons and circumstances why and where it may be necessary here, but there are three main options:
- rigid (i.e. drop-in wheelsets with no further work)
- compensated (the traditional method using a rocking axle)
- sprung (using steel wire to allow the individual axlebox to move up and down)
So I've built three wagon chassis, to illustrate each possibility: 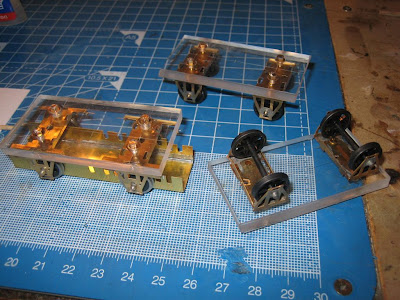 As you'll clearly (sorry!) see, the "body" on which the suspension units are mounted are clear pieces of perspex, cut to the same size as a typical 10-ton wagon.  This means that it is easier to see how the units are constructed, and also when used in practice on a demo piece of track.
The one on the left is sprung using Bill Bedford units, the one on the right has a Scalefour Society rocking unit, and the one at the rear is rigid, using Scalefour Society units but folded up to sit on the chassis without movement.
Of course, no matter what suspension method is used, it is critical that the axles are absolutely parallel with each other.  That is why it is sitting in a Brassmasters chassis gauge, which sets the final adjustment into alignment at the chosen wheelbase.  It's a tool that I certainly would not now be without in building reliably running wagons.  It's usable for any 4mm gauge as well - not just P4.  The final glueing of the suspension units with a spot of superglue to hold them on place is the reason why it is being used.
So there you have it.  Hopefully something that will de-mystify P4 in one more aspect for those that are curious, and also a useful way of checking the reliability of my own track by watching the suspension work as the wagon is pushed along it.
Posted by Flymo at 09:56 2 comments:

I'm not in the habit of giving random plugs to magazines just because they have a P4 layout in them, or a model built to 18.83 standards. However I'm going to break that rule in the case of February's edition of Rail Express, which hit the bookstalls last week.In the Modelling section in the middle of the magazine, you'll find an article by Society members Terry and Simon Bendall. This is the first instalment in a new 24 part series dedicated to showing the building of a small layout in P4. It's based on BR Southern Region, third rail prototypes, but the basic principles are equally applicable to many locations and periods.The series will take you from the initial concept, through building the track, to the surroundings and the rolling stock that is needed and will get you started. This is categorically a practical layout that could be built at home, and by the "average P4 modeller".So even if you are not a D&E modeller, you may well find that this is a very interesting project. Indeed, you may feel that at the steady pace of one episode per month, you may want to build your new layout alongside Terry and Simon...
Posted by Flymo at 16:07 1 comment:

If this was a James Bond script, you'd think that there was a missing "i" in there somewhere...

But in actual fact, it is nothing more than a reference to the amiable proprietor of Eileen's Emporium, Derek Russan.  Now Eileen's has become the "one-stop" for me for tools, materials and general bits and bobs.  However going to see Derek has its dangers...

I was glad that he was at the St Albans show, as I needed the pin-chuck adapter that had been suggested by Terry Bendall for my pillar drill, and a couple of packets of 14BA brass countersunk bolts for a small project that I'll be able to finish now.  A few quid's worth, and nothing more.

So how on earth did I wind up walking out with a new airbrush compressor?

Well, it's down to Derek's superb salesmanship, a demonstration of how much quieter his new compressors are than my existing 15 year old "thumper", and a very tempting price :-)

So thank you Derek, it looks like a superb piece of kit, and I'm very much looking forward to trying it in anger. 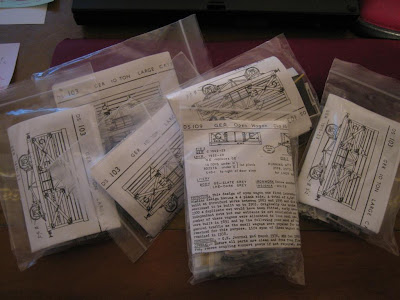 Thank you Dan Pinnock!  He has a longstanding large order of mine, and every so often I get a mystery package turn up on the doorstep.  Nothing is critical in timing, so it makes it even more pleasant when it happens.
What a top bloke :-)
Posted by Flymo at 21:39 No comments:

Just a quick plug for an event that the Scalefour Society is organising...
We are  pleased to announce a practical workshop, aimed at those who are interested in modelling to finescale 4mm standards, or who are new to P4 modelling and want to find out more first.
This is a repeat of the successful Workbench held in London in 2010.

The Workbench is open to all modellers, and not only members of the Scalefour Society.

The workshop will give an introduction to:

•    Fitting suspension to a model wagon

•    Thoughts on methods of track construction

The workbench will be run by experienced P4 modellers and will give hands-on experience in all of these areas.  Attendees will need to bring with them a small selection of tools and details will be provided in advance of the Workbench.

Tea and coffee will be provided throughout the day.  Attendees will need to make their own arrangements for lunch.

To get further details or to book a place contact Terry Bendall :
e-mail terrybendall@scalefour.org

End of advertising break!
Posted by Flymo at 08:13 No comments: