It's a bit bright!

But nothing that a bit of weathering won't tone down.
As this Pug is now transformed for industrial use, then I don't need to slavishly follow a prototype livery.  Which is some respects is a shame, as I was quite looking forward to seeing it in L&Y black with red lining.  However I do have a second High Level chassis kit in the drawer, and a spare body, so I can always do that in the future...
This is the base coat - a Humbrol medium red - sprayed on over the black original livery.  I took it carefully to build up the colour in thin layers without runs or other blemishes. 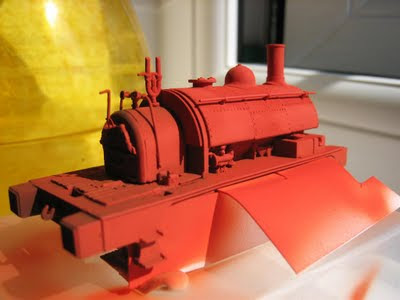 You see what I mean about bright!  The masking will cover off most of the motion and wheels so that I don't have to clean them off to a great extent. 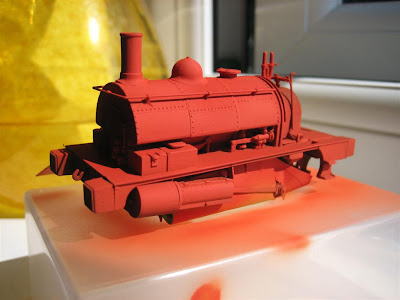 The next tasks will be the footplate/chimney/etc in black, and then on with the black panels around the red, and finally into some very fine orange lines, complete with reversed corners.  There's nothing like a challenge!
Posted by Flymo at 07:16 2 comments:

Ready for the finish

Well, the weather is perfect for gardening, or DIY, or painting small L&Y locomotives...
So having run the Pug successfully at the North London Group meeting last Monday night, it is a good time to fire up the airbrush and put a livery on it.  However, before I do that, I thought that I'd post a couple of pictures of the finished work from the High Level Kits chassis and conversion kit.  I really can't recommend this too highly for its level of detail and precision of assembly.
First of all, showing the cab detail.  All of this is new in the kit, and replaces the motor in the Dapol original! 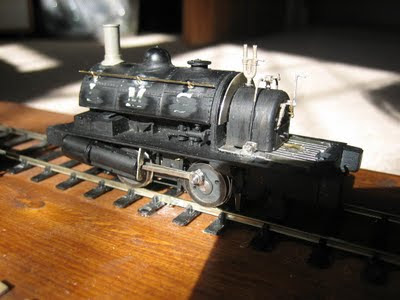 And the other side.  The lettering has been rubbed down with a glassfibre brush to help avoid it showing through the top-coat when it is put on.  More of that when the painting is underway... 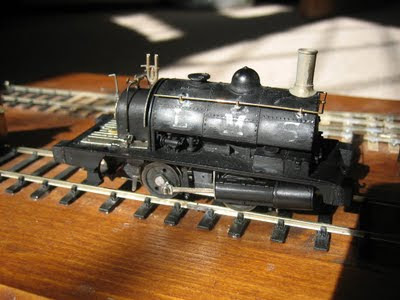 The final task before painting will be to mask as much of the wheels as possible, to avoid gumming up the mechanics.  Let's hope that I'm successful in it :-)
Flymo
Posted by Flymo at 21:41 No comments:

That's what I'll be doing later today...
First thing this morning I decided to fire up the airbrush and put a coat of self etch primer on the chassis of my Y14.  So I set up the spray booth, turntable, mixed the primer, loaded the air-brush...
And promptly fired the chassis to the back of the booth!  Ho hum...
A _gentle_ application of primer seems to have done the trick, but I really should knock something properly designed for the task.  I'll dig out a couple of offcuts of timber from the garage and see what I can do with some bent coathangers.
For now, I'm off to take the motorbike out for some background photos of research for restoring Ulpha Light.
Flymo
Posted by Flymo at 09:29 No comments:

What an absolutely superb show!  I was so pleased to have made it, after dropping my better half off at Mallory Park for a spot of sidecar racing...  Certainly the best selection of layouts that I've seen at Scalefour North.  Every one of them interesting, and in a different way.

My personal favourite was Horselunges, because it's exactly the sort of rural shunting puzzle that I'll build myself one day!  In close seconds were Lee on Solent and Longcarse West, both of which I can stand and watch for hours.

I hope to see all three of these again in the near future - Gordon Ashton mentioned that Horselunges was invited to appear at the Pendon show soon, and I encourage everyone to go a see it.
The trade support was excellent as well.  I don't think that there was a single moment when there wasn't a crowd around the Hogh Level Kits stand, but at least Chris hadn't run out of his new "spacesaver" bearings by the time that I reached him :-)

My only regret was that because my diary was so crowded I didn't get the opportunity to make a weekend of it :-(

I haven't had much chance to spend time online since enjoying the Modeller's Weekend at Missenden.  I didn't actually post from there as it seemed much more important to actually get some modelling done :-)
The last couple of weeks have been very busy with work, and other matters, but I have been doing more modelling in the background.  One of the things that I learned at Missenden was that my toolkit was deficient.  Those who saw me unpack, and produce all manner of oddments on request throughout the weekend may find that hard to believe but it's true.
One of the things that helps Tim Watson, our group tutor, produce such superb 2mm scale models is that he has a precision to his metal work that borders on that of a watchmaker.  A lot of this, such as filing is done using a vice to hold the workpiece.  In contrast, I just use the edge of the bench, or hold it in my fingers.
So when he suggested that a proper jewellers' vice would help enormously, then I saw the common sense in it. Tim advised not to waste money on a cheap one from one of the tool suppliers that you get at exhibitions, but to invest in a proper one from a watchmaker's suppliers like Shesto.
On returning from Missenden, I searched for the type that he recommended, and a few other bits and pieces that I needed, and ordered them online from Shesto.  Fortunately, as a Scalefour Society member, I get a 10% discount on everything ordered from Shesto, so I've already saved nearly half of my annual Society subscription.  Which is nice :-)
When the package arrived, i had a good look at the vice, which is a lovely engineered piece of work, and also demountable via a clamp and lever from its base.  I decided to place it on the right hand edge of my bureau cum workbench, where it will be easy to use.  Having it able to be removed means that I can take it off and still close the lid to turn the workbench into a normal piece of furniture again.
I marked out the boundary of the base, to be inset into the timber, and attacked it with a couple of chisels... 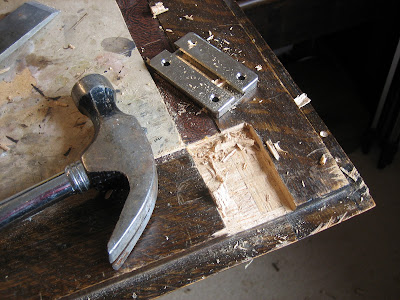 That is the base of the vice at the top of the picture, being checked for size.  I took a bit of care to get the hole nicely trimmed to fit tightly, and ensure that the bottom surface was smooth.  I raided my stock of screws in the garage for some cabinet-makers screws that would fit flush - my last ones, so I must remember to get a further stock - and then cleaned everything up and tried it for size: 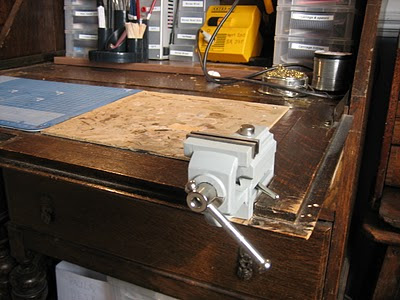 The result is a total success.  Sturdily mounted, and able to be tidied away.  I haven't tried it in anger yet, but I'm sure that I will soon...
Posted by Flymo at 07:56 2 comments: