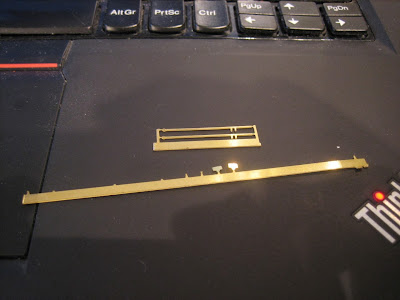 I've managed to do a little modelling in the last few days, but had scarce time to document anything.

I haven't forgotten the Ulpha Light Railway whilst I've been finishing other projects.  And I was moving motorbikes around in the garage this evening when the last rays of the late afternoon sun caught the layout.

The quarry's industrial Pug moves a few wagons around under a threatening sky, to form tomorrow's early morning freight train.  I hope that it doesn't start to rain... 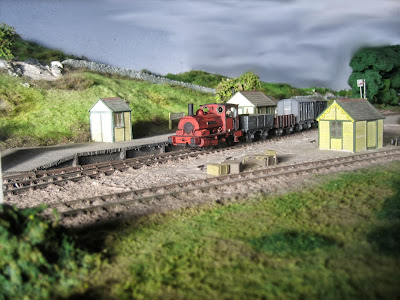 Cheers
Flymo
Posted by Flymo at 23:32 No comments:


The Coffee Pot continues to progress...

Last night saw sand pipes going into the body, left over-length at the moment so that I can shape them and trim them back when the wheels are fitted.  On the front end went the coupling hook - and Exactoscale one which initially I thought looked overscale.  Now that it's fitted in place, it seems to have just the right amount of heft to it.

I realised that I hadn't fitted the front lamp irons on the buffer beam either, so those went on.  At this point, the right hand side dumb buffer promptly fell off!  It was better that it happened at that point than after the paint had gone on the locomotive, so I only swore a little bit, then put it back on.

The photo with an appalling depth of field does at least give an impression of how it looks: 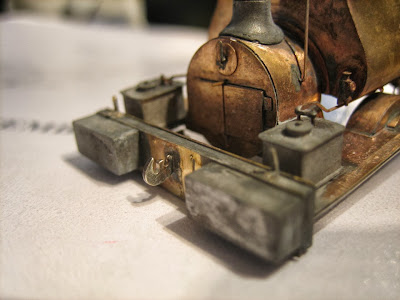 Back with the chassis, the last proper soldering job was to add the drain cock detail to the bottom of the cylinders.  Again, this is a usual highly detailed High Level confection of etched bits and fine wire.

I differed from the instructions slightly.  It was a little too difficult to drill all three holes in the cylinder bottom to locate all three wires into it.  I could probably have done it with a 0.4mm drill in the pillar drill if I'd wanted to.

So what I actually did was drill the hole for the central wire, and used that as the locating anchor.  The wires at the two ends were then tack soldered in place, which seems to hold them strongly enough.  Certainly if the model is knocked in a way that disturbs them, it's going to have bigger problems than a bent wire!

I realised afterwards that I'd taken the picture before cleaning up the remains of the solder paint.  The final result is much neater and reflects Chris's thoughtful kit design. 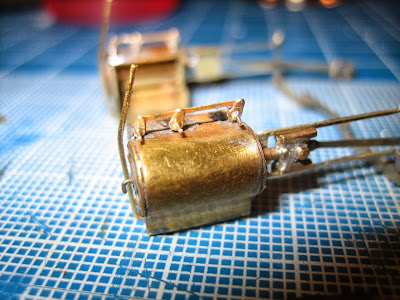 After this, the body had a good scrub and went into the ultrasonic tank, and I started work on the fold-up gearbox.  More to be done on that this evening, I hope...

Back to the Coffee (Pot)

It's been a busy few weeks, resulting in a lack of modelling.

However inspired by the sight of Will Litchfield's almost completed GER Coffee Pot at Scaleforum last weekend, I was provoked to start work on mine again and move it to completion.  Picking up the trail through the instructions, I was pleased to find how little there was to do.

The first task was to repair the damaged crossheads that arose during a very frustrating slidebar/wooly jumper sleeve interface.  I still won't go into detail of this, as the thought brings me out in a cold sweat.

The other impressive thing about Will's locomotive is the weight, for something of such a small size.  Will explained that this was because he had packed the saddle tanks with lead, as well as the bunkers.

I'm intending to leave the bunkers as they are until the final assembly is complete.  My worry is because they are distinctly to the rear of the rear driving wheels, adding weight may unbalance the front end, and make it less good at roadholding in curves.  However there was something that I could do about the tanks...

I started by cutting a length of 70 degree Carrs low melt solder into small ingots.  These were introduced into the spaces in the saddle tanks from inside, and flooded with flux.  The introduction of a hot iron with a large bit resulted in the solder flooding the space.  I was able to build up successive layers until the tank was full.  I then turned the loco onto the other side and repeated the exercise. 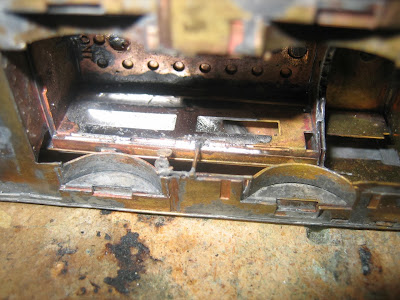 Having done both sides, the weight of the loco body is now a much increased 71 grams.  The next steps are sand pipes and cylinder lubricators - more fiddly work.

Before that was a trial fit of the chassis.  This shows that there is actually much more space in there for the mechanism and DCC chip than I expected. 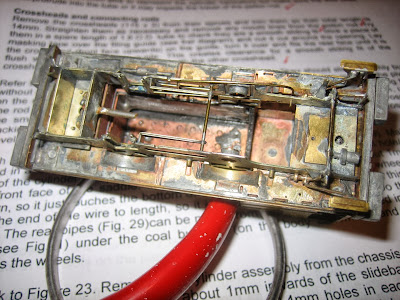 I hope to make further progress (and give the whole model a good clean) tomorrow evening...