I've not done very much on the Pug recently.  However I picked it up again earlier this evening to get started on the brake gear.  This is very cleverly designed as a one piece unit that can be removeable.
To start it, I made up the brakeshoes and put them ready to be fitted to the crossbars.  Here's a picture of all four of them prepared.  The next step would be to mount the wheels to set the shoes to the correct position. 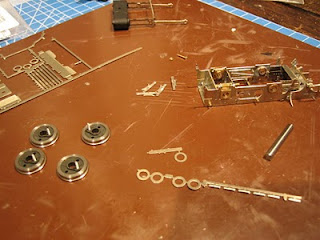 Unfortunately, after I'd mounted the wheels on the axles in the chassis, I went to pick up the brakeshoes (centre of picture) and found only three of them :-(((
I suspect that whilst fitting the wheels, I caught one of them with a sleeve and flicked it into the far corner of the room!  I've spent twenty minutes on my knees on the floor grubbing around and not found it.
So out with the nickel silver scrap and the piercing saw when I next start on this again. Sigh...
Posted by Flymo at 23:40 1 comment:

Well, although I haven't posted anything for a couple of weeks, I've been busy with the Pug and a few other things - of which more anon - so I'm not going to go through a blow by blow build of the chassis.  Rather, this will be a picture essay, with a few comments where appropriate.
Where I left it previously, I'd finished the cab fittings and was ready to move on to the frames.  As previously, before doing any construction I gave the etchings as a good going over with the fibreglass burnishing brush to remove any surface oxidation.  That gives the best possible start for soldering to be done.
So to start, this is the basic chassis with the frames and the P4 spacers erected.  I had one minor mishap  where I filed off a locating tag by mistake.  There *is* a warning in the instructions, but it comes after you've removed the part from the fret and (if you're of a fastidious mind) already cleaned the etching up :-/
Never mind, there are plenty of other location references, and the kit naturally goes together absolutely square. 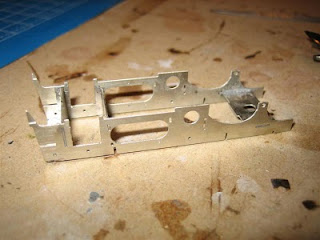 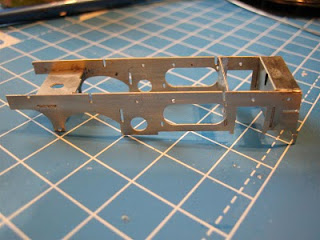 One of the next tasks was to laminate the coupling rods.  This was done using solder paint, and a cocktail stick rammed through the holes in each end to keep them together and aligned. 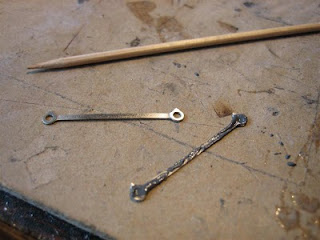 This is the finished item.  The slight banana shape of the rods isn't actually there.  It's a function of the camera lens in taking pictures of some very small objects at very close range. 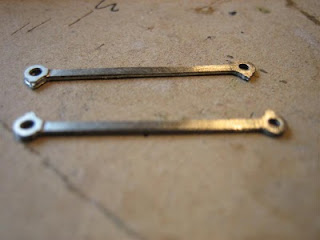 The next picture shows the sliding bearings and the matching hornblocks being held in place by a coil spring so that they stay in place whilst being aligned using the London Road Models tapered axles.  These allow the centres of the coupling rods to match the bearings exactly.  One axle is fixed in my model, so it only needs one set of moving bearings, and not the two pairs if I was going for a fully sprung model.  A conservative choice on my part, given this is the first loco kit I've built in around 15 years. 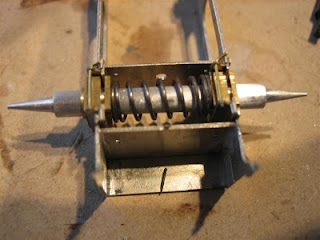 This shows where I went away from the instructions slightly.  The suggestion is that to provide a mounting point for the front chassis bolt, it is possible to tap into the body moulding.  I found that there wasn't enough meat in the material for this.  As an alternative, I carved a larger section away, and filled it with a couple of layers of thick plasticard laminated together with PlasticWeld.  I then left it 24 hours to dry thoroughly and harden before drilling through and using the mounting bolt to cut its own thread. 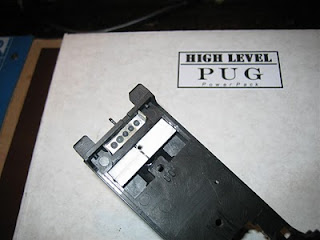 So after readying the body and test fitting it, the original cylinders and slide bars are re-used and mated with the frames.  This was done using a 14BA bolt.  Not too fiddly in isolation, but unfortunately when it needs to be weedled into a gap between two spacers with tweezers it became a job that needed much patience and a few rude words when it came to getting the nut on the end of the bolt. 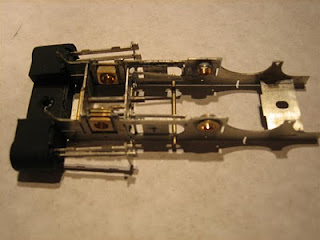 The next (slightly blurred)  picture also shows the compensation pivot point.  It's a chunky piece of steel rod, so there's no danger of it wearing down.  Fixed in place with a little reaming of the mounting holes, and the use of Carrs Brown Label flux, it was very easy to solder securely. 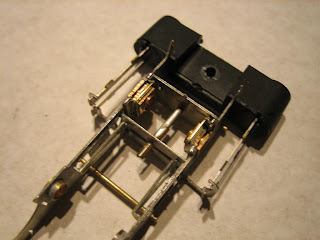 It does seem as though the spacer and slidebar hangers could be more closely aligned.  I may have made a mistake here, but tightening the mounting nut up tightly does induce a distinct bend in the crosspiece that is the slidebar hangers.  Perhaps a spacing washer should be used to keep things parallel. 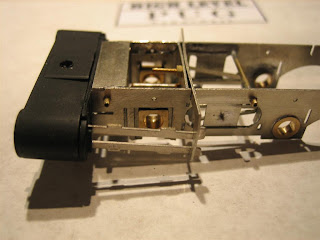 This shows a more complete state, with the connecting rods soldered in place.  It remains to be seen how much clearance I have when I come to install the wheels behind them, but there is still meat left in the backs of the bushes that can be filed down.  Also visible is the dummy inside motion, which makes the chassis look nicely prototypically cluttered. 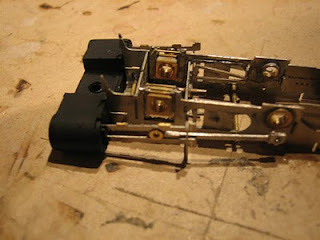 The ashpan is fitted next.  I pressed out the half-etched rivets by hand, using a sharp scriber and even hand pressure.  This was done on a slightly soft cutting mat, to give a yielding surface to form them against. 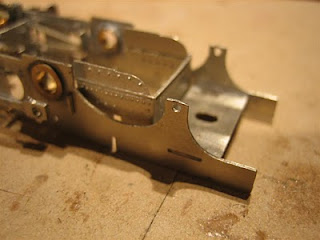 And finally, some neat little webs not only represent the strengthening ribs on the prototype but also neatly locate the rear guard irons.  Another piece of really clever design that is a hallmark of the High Level Kits. 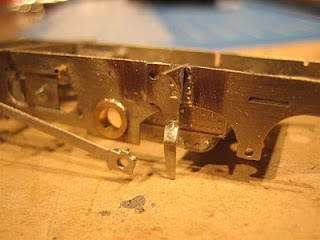 After all of this, the chassis had a good  rinse with Neutralising Rinse (Carrs again) and a dunk in my wife's ultrasonic cleaning bath.  That really made all the accumulated crud and chemicals drop off it, and it was followed by an overnight dry on the top of a radiator.
Brake gear building next time...
Posted by Flymo at 18:56 No comments: