Next is the fitting.  I would assume that any sensible modeller will have fitted the functional tie-bars, to hold the point blades at the correct distance apart, before gluing the turnout to the baseboard, and ballasting it.  I cannot lay claim to being so sensible, so I’ll gloss over the selection and fitting of your personal choice of tie-bars.
The first step in installing the TOU is to solder the dropper wires to the point blades extending down through the baseboard.  I file a small v-shaped notch in the foot of the rail in the appropriate place for the wire to sit into, to make it as unobtrusive as possible.  A lot can be achieved in disguising the wires by carefully filing back the solder afterwards.
I use dropper wires that initially are much too long.  This is to make it easy to handle them.  Any extra length is cut off afterwards and either re-used for other dropper wires or put in the “spare wire” box for future use.  It’s the sort of thing that is never wasted.
You then slide the dropper wires into the dropper tubes of the TOU.  A tip when doing this is to have the dropper wires of unequal lengths.  That means that you fit one at a time, rather than having to try and guide two bits of very thin wire into very small holes simultaneously – a task that requires at least four hands, or an awful lot of patience.
After sliding the TOU down the wires to the baseboard, it is necessary to fix it in place.  As mentioned earlier, you could use any method to do this, although I preferred to screw it down.  In locating the TOU, I wanted to make sure that the functional tie-bar was correctly set ar one end of its travel.  To do this, I used a small bulldog clip to hold the pointblade closed on one side, and then had the functional tie-bar set to one end of the travel.
The TOU was then screwed in place.  Once this was done, I snipped off the ends of the dropper wires so that they only just protrude from the bottom of the dropper tubes.  This will reduce the chances of them being accidentally snagged and causing or being caused damage.
It would be possible to bend over the ends of the dropper wires in the bearing tubes to provide vertical restraint on the movement of the pointblades, to prevent them rising up.  I haven’t done this, as the type of cosmetic tie-bar that I’m using will prevent the blades lifting in this plane. 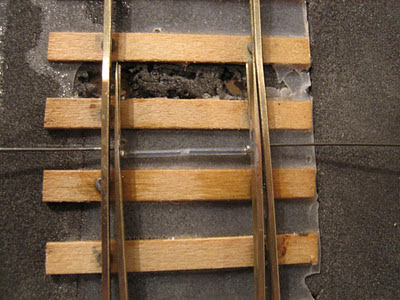 After this, the motor to drive it was installed.  Again, how this is done is down to personal taste.  As the Conrad point motor that I am currently using does not have user-definable limit travel, I have decided to use a relatively long drive rod with a sizeable omega loop in it to take up the slack and hold the point blades firmly over. 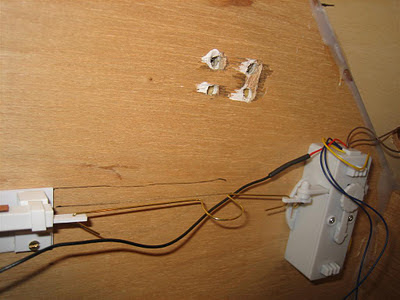 To give you an idea of the scale, the omega loop is approximately 1.5cm across the diameter.  It was formed by hand using a few tweaks of snipe-nosed pliers in the length of wire.  This is in itself a length of the 0.8mm straight brass wire referred to earlier.  I’m sure that other methods of driving the TOU would be equally, or more efficient.
The black wire that you will notice behind the operating wire is simply the earth return wire from the point motor.  I have arrange the wiring of this particular board so that the live wiring feed goes up one side of the board, through the switches and associated components – point motors and electro-magnetic uncouplers – and then returns down the other side of the board.
The wiring is kept neatly in place with a few spots of glue from an ordinary DIY hot glue gun.  This is showing one of the uncoupling magnets, not the TOU! 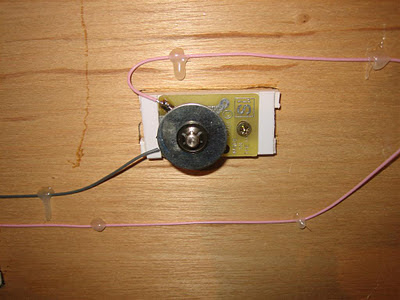 As always, I’m not afraid to say when things have gone wrong.  In this case, you may notice that there is an extension piece on the end of the functional tie-bar.  This was simply because I only noticed after I’d installed the TOU that I had fitted it the wrong way around.  I had left sufficient material to drill a hole to attach the operating wire at the end of the tie-bar, but this was now at the opposite end. 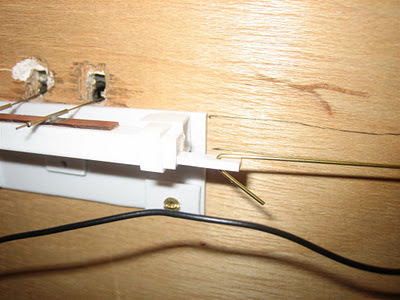 Rather than take off the entire TOU and re-mount it having turned it through 180 degrees, I simply decided to use a spare bit of the 60 thou plasticard glued inside the end of the square tube.
The operating wire was passed through a small drilled hole, and the end bent over to hold it in place.  At the other, point motor, end, the wire is passed through the operating arm of the motor, with it manually set over at the limit of its travel.
And that’s it.  They have now been tested and work successfully.  The longevity of them naturally remain to be tested – ask me in five years or so if I’ve had any problems.  In the meantime, if I’ve missed anything out, or I’ve been unclear, please do drop me a mail to ask.
Posted by Flymo at 10:55