A quart in a pint-pot


That's what it felt like after making the decision to change from DC to DCC control...


As I have a liking for small locomotives, fitting a DCC chip will always be a challenge, and even more so when the locomotive is virtually finished.  You may recall that my little L&Y Dapol Pug has transformed itself into an industrial locomotive (with the aid of a coat of brick-red paint) and was waiting only nameplates and a final weathering.

As befits this very ingeniously designed kit from High Level, the innards of the model are entirely packed with motor.  Additionally, due to the way that the build goes together, access to much of it is difficult without doing a partial "unbuild" to reach the interior components.  On the plus side, at least I had successfully wired up the loco for DC operation and knew that it ran reliably.  This is how the underside looked in DC mode: 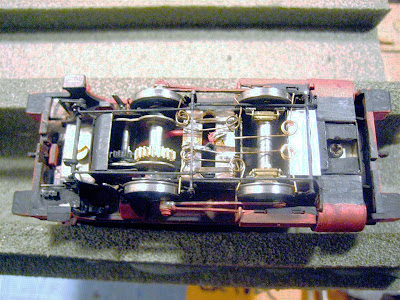 There's not a huge amount of room in there to fit any type of DCC chip...

Fortunately help was at hand from other Scalefour Society members.  When I visited the Norfolk and Suffolk Area Group a couple of weeks ago, I took the Pug along with me.  I was helped enormously by NSAG member and DCC guru Nigel Cliffe who was present.  As he spends much time putting DCC into 2mm finescale locomotives, then the Pug gave acres of room in comparison.

Nigel suggested taking out one of the spacers used to mount the pickups and slipping a small DCC chip in under that.  His initial recommendation was for a CT DCX75, which is small enough to slip into the space.  I promptly ordered a couple of these.

I started work on the DCC conversion by taking out both of the spacers to make room for the chip to go in.  Because of the presence of the end of the compensation beam and various fixing screws, I couldn't quite slip the chip in under just one spacer.  However it did fit very neatly in place between the frames when both old spacers were removed: 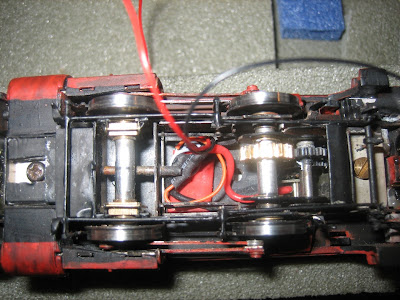 To avoid any possible shorts, the chip itself has been wrapped in some plastic masking tape.  It's the little red package that has tucked neatly under the end of the compensation beam.  To make sure that it didn't dislodge when the Pug is in use, I used the tiniest amount of superglue to fix one end in place.  The thick red and black wires are the original ones to the motor from its DC days.  The very thin grey and orange wires that are just visible are the ones from the DCC chip to the motor.  These have been soldered to the motor wires (after cleaning up the old soldering gunk on the ends...) and covered in heatshrink tube.
I then installed the  replacement spacer to mount the pickups on.  This was slightly wider than the original ones, and was located centrally between the wheels.
I always have trouble with wires becoming detached whilst trying to solder pickups to the same piece of copper-clad, so I decided to create some positive location for these wires.  Using a fine drill (size didn't really matter in this case...) I drilled two small holes to take the ends of the red and black DCC wires. 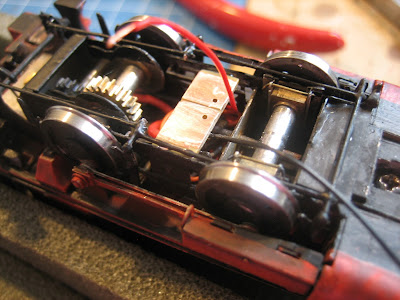 The ends of the wires were then inserted to hold them in the correct place, and soldered securely.﻿ 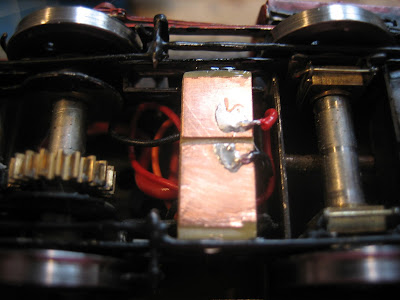 From here it was just in to the home straight, which unfortunately for me always is a long and painful one...  I really am no good at fitting pickups on locomotives!  I can just about manage it, but they are a bit hit-and-miss.  The next "clean" build that I start on a locomotive is going to be and experiment with split frame collection...

With the aid of fine-nosed pliers, and a lot of patience, I designed and made the pair of three-dimensional wires that can be seen here.  They seem to fit well, and work effectively so far. 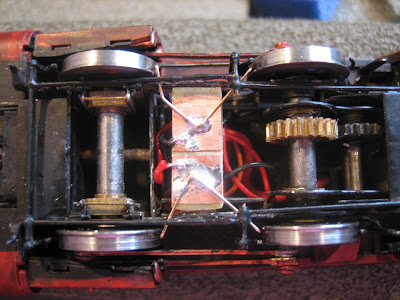 And that was it.  A successful DC to DCC conversion.  I hauled out my ZTC controller, connected it to six inches of test track and the Pug moved under its own steam.  It's a little jerky, which I think is the pickups needing to bed in.  The motor or wheels have not been touched during the conversion, so I shouldn't have disturbed those.  It could really do with a few minutes running on a circular test-track to loosen it up.  I'll have to see what sort of opportunity offers itself.

Many thanks to Nigel for all of his advice and confidence that this could be done.  Now to finish the weathering and put it safely to bed.