The non-stop rain in Hertfordshire meant that I was largely confined to home this weekend, apart from a spell in the garage to continue painting the floor, and a spin on the SS up to the garage where my car is, as I had to choose the colour of new carpets to go in it.

So on Saturday I had the opportunity to do a little more work on the Coffee Pot.  And what a joy it was, as the design quality of the kit showed itself again.  Below are a few pictures showing what I mean: 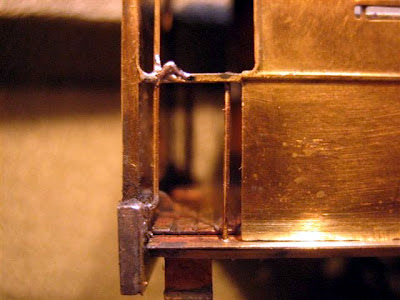 To make fixing the cab handrails easy, Chris has designed in a cross-brace that goes across the entire cab opening.   This means that there aren't tabs or flaps that can get bent earlier in construction, and the whole thing strengthens the cab whilst it is being assembled.

You then insert 0.4mm wire through holes at the lower end, and then solder it to the cross-brace.  As you can see, cutting the wire overlength, and then soldering it (messily but strongly) on the side away from the cab means that it is securely fixed. 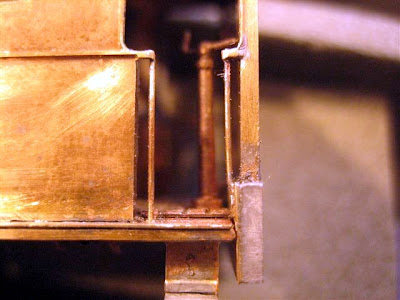 And  this is the end result.  I'd already done the other side of the cab.  The cross-brace was first snipped in the middle with my best Xuron sidecutters, and then the remains of the cross-brace trimmed back.  The final touch was a few strokes with a fine needle file to round off the edges.  Looking at it in close-up, this one isn't quite perfect, as the rear rail comes in slightly at the end.  I always forget to use things like scraps of wood to set handrail depths so that they are absolutely parallel :-/ 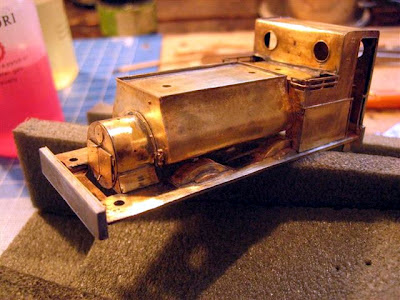 Next steps involve the buffer beams.  These are cast whitemetal, which has three benefits.  Firstly, it adds weight in a really useful place on the model.  Secondly, it allows for the proper prototype construction of steel-timber-steel to be replicated. 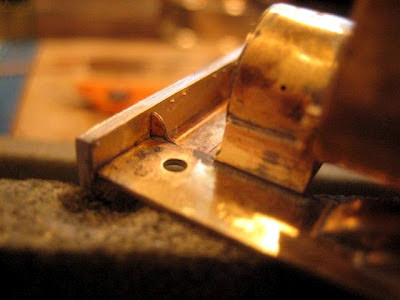 And thirdly, it allows for some really crisp rivet detail to be incorporated.  This just wouldn't be as fine  if the whole buffer beam was a single casting.  Just have a look at the detailing that is on the _rear_ of the bufferbeam.  This would hardly be noticed when the model is completed, and yet it is there... 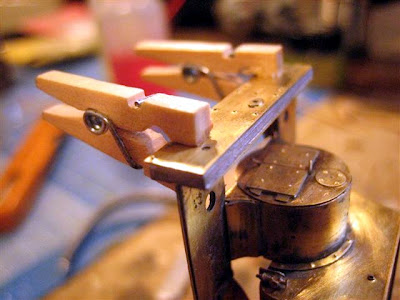 Then it was time to put on the outward facing overlays to the castings.  To do this, and make sure that they were in exactly the right place, I pre-tinned the etched brass and and held it in place using miniature clothes pegs. 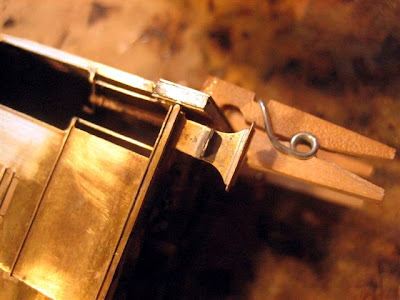 From a sightly different angle you can see how the sandwich construction of the bufferbeam is faithfully reproduced.  With the etching held securely in place, all that I had to do was to place a drop of flux at the edge and flash some low melt solder around it to fix it firmly in place. 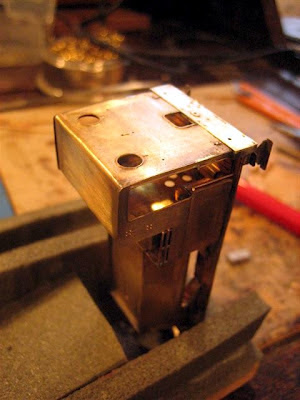 This was helped by being able to stand the model vertically in my foam cradle, which grips it just firmly enough to be used as a "third hand" and unlike a vice means that there is no risk of accidentally damaging it by crushing the model.

Finally, the cast whitemetal dumb buffers were fitted, which gives more useful weight, and the whole thing was given a comprehensive clean to remove the excess flux.

I'm really pleased with the session's work.  Next, it's on to the boiler and tank fittings...